Reef Escape is a free game for Android phones released recently. A fisherman’s worm bait has decided to take back his freedom. But as he put his escape plan into motion, he falls into the water. Now, it’s up to you to save our hero from the great perils of the sea.
Mixing together elements of classical animation and old-school difficulty, Reef Escape is set in a beautifully illustrated underwater environment. A fun and challenging game for all ages.

The game was animated in After Effects using Rainbox’s script Duik and built in Unity by 8 bit bosses in Puerto Rico, with some help from Meephead.

We asked the team behind it to give us more details about the game.

How did you come to the idea of this game?

The idea and concept for the game came from one of our programmers. Being total “noobs” in the gaming industry we wanted to create a simple game. I mean, who doesn’t want to create their own game, right? So we started to look at mobile gaming, we wanted to give an old school platformer feel that does not hold your hand. We wanted something that would entertain the mobile market, but we needed something that wasn’t to ambitious for us since this was our first project as a team (8 bit bosses). So the idea was to put some of the difficulty of the 8 bit era on to the modern gaming environment. 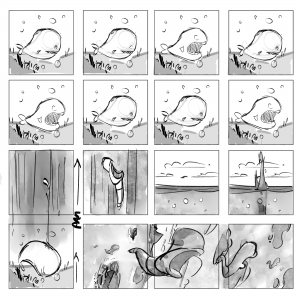 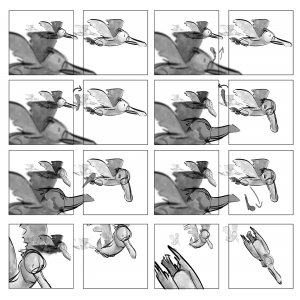 Were there many people to work on the game? Does it need a big team to make a game like that?

Originally the team consisted of 5 people, from animation to programming and sound design. How many people do you need to do a game like this? Guess it depends on what the end goal is, in terms of time and quality. I’m pretty sure if we went the 2D classical route, we would probably have needed more people to finish the game on time. Thanks to our collaboration with Meephead, we were able to count with a few extra hands on the game.

Can you tell us a bit more about your pipeline, what tools did you use?

Like any other project, you need a lot of planning and even then there will be situations that’ll come out of nowhere. We never started to work on a character design or animation until we had a thumbnail sequence or some rough animation. Once we had the look and feel of the different stages then we started with the drawing and coloring of assets in photoshop – be it for characters or the levels.
On some of the stills you can see the characters already rigged with Duik in After Effects. We kept all of the animations on the same composition so we could render out different sequences of the animation later on in case we needed to edit some animation. 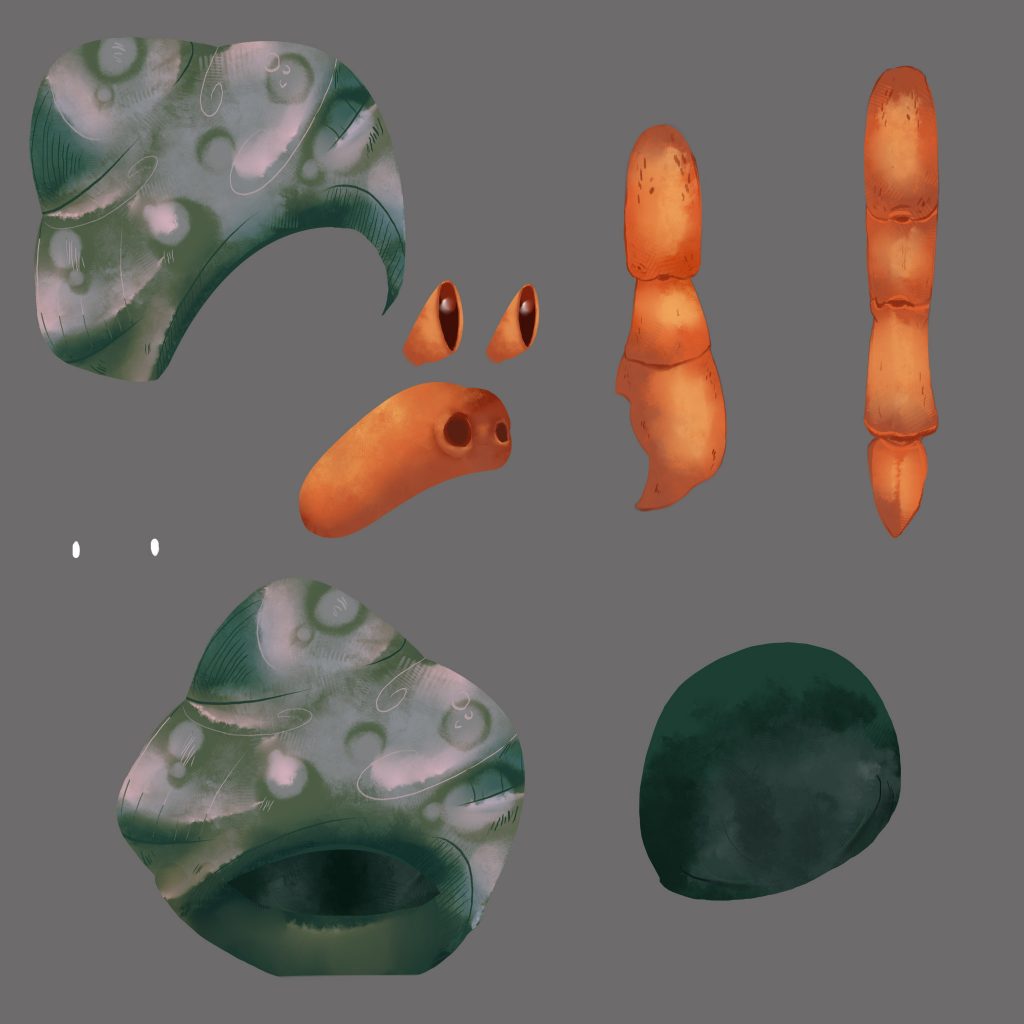 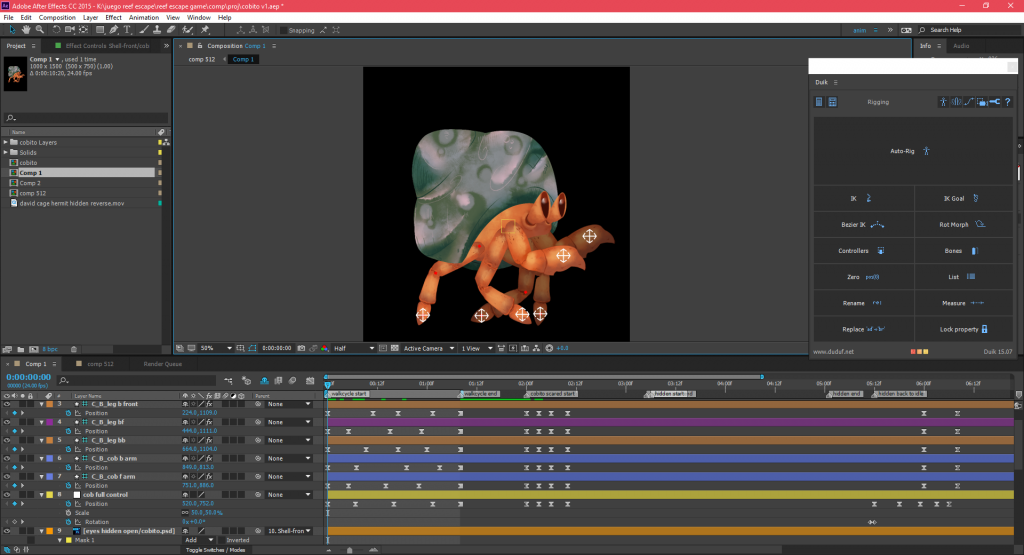 Why did you choose to animate with After Effects and Duik?

At first with treated Reef Escape like a 2D classical animation project, but soon we realized that it was going to take longer than expected. Our goal was to keep the 2D look as faithful as possible and be able to finish the game as fast as possible. We realized that it couldn’t be treated like a 2D animation film, that in animation towards games there’s a lot of edited movement and couldn’t be approached the classical way due to the time it was going to take to animate everything.

Our team was already working with After Effects, it permitted us to render stages to test as if you were playing the actual game to see if everything was going to work. As we already knew how After Effects worked we needed a tool that could keep the 2D look and feel without having to animate everything frame by frame, enter Duik. Once we got our hands on Duik we were basically doing all the animations for Reef Escape and cut scenes at the same time. The time it was going to take us to finish the game was basically cut in half!

How did you use those animations in the game? Did you rendered them in After Effects and use them as sprites, or did you export the rig and animations to use them in Unity in real time rendering?

Yes,we rendered them in After Effects and use them as sprites, We were trying to achieve the 2d animation look the best we could. We didn’t know that you could export the rig and animations straight onto unity. We’ve been using Duik for about a year, we didn’t know you could do this. Guess you learn something every day.

Duduf’s answer: there’s no easy way yet to export rigs and animations from After Effects and import them in Unity or any other game engine, but with some development it’s possible. The idea is to export a “description” of the rig (IK’s, controllers, coordinates…) and the animation informations – for instance in XML format – then automatically re-build the rig and re-create the animation in the game engine. Some studios already began to work on this kind of production pipeline, and here at Rainbox, we’re planning to add Import/Export tools in Duik to ease this process (exporting rigs and animation to XML, JSON, and maybe other formats like HTML+CSS for web animations).

What would be your main advice for anyone wanting to build a game using After Effects in their workflow?

Organization! This was a project that took a while to realize due to the team not being able to dedicate its full time to the game. But keeping things organized kept everything fresh on memory, even when there were long periods without touching the project.

Finally, what would you say to potential Duik users, and players of the game?

Duik had a very important role in the making of this game, this tool itself is a very powerful asset to have when creating animations be it motion graphic, short movies or game animation. When you combine Duik with any other program or knowledge like 2D traditionnal animation it multiplies its effectiveness. We found that Duik was very easy to use and we could adapt to it pretty fast, in some ways it’s almost a springboard towards 3D animation in terms of rigging and animation.

Big shout out to Meephead studios for helping us publish Reef Escape, to players we hope that you enjoy the game as much as we enjoyed creating it.

This site uses Akismet to reduce spam. Learn how your comment data is processed.