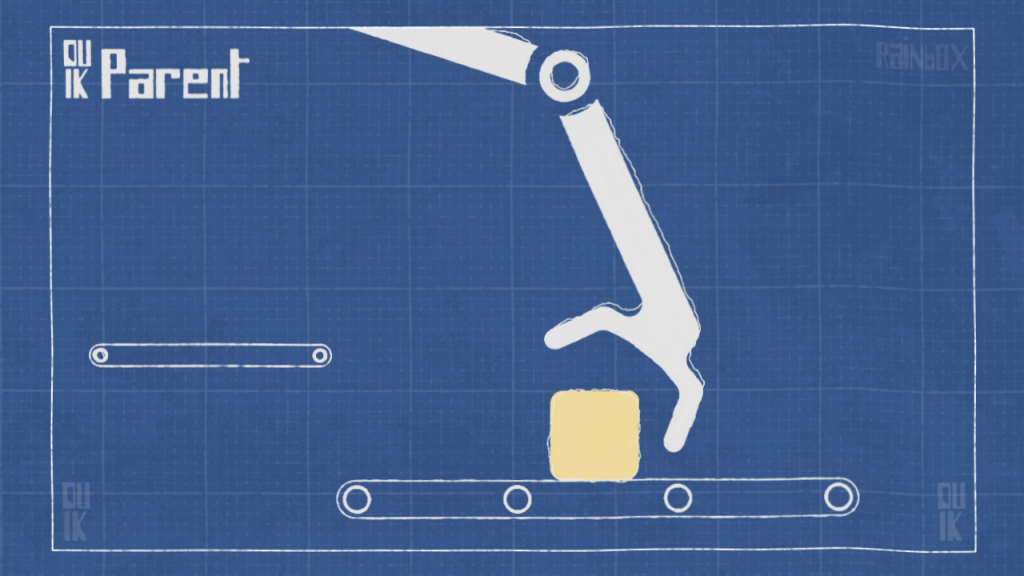 Important Note: this article will be updated regularly as the development of Duik 16 goes on.
It will eventually become a nice starting guide to Duik 16 new features when it will be publicly available.

It’s not just a new version of the Duik you may already know, it is a whole new thing, each and every line of code has been re-read, re-thought and re-written, with a lot of additions, improvements and new features.

I’ve come to realize that now Duik is not anymore just a script, but it really deserves it’s name of “tool set” for After Effects. The complete list of features is huge, and it’s more like a lot of different scripts packaged together to bring animation in After Effects to a whole new level.

I’ve been working very hard on it, and I’m very proud to give it to you very soon. For free! Yes, it’s still free, even if a lot of its individual features could be scripts sold for dozens of dollars, because we still believe free and open source softwares can make the world better, and we stick to our convictions.

Working with Duik 15 and thinking about Duik 16

Duik 15 has been out for more than two years now, and it was already a big update, the first one to be funded thanks to a successful crowdfunding campaign. During those two years, a lot of animations were made with Duik – explainers, short movies, feature films, music videos, series – and here at Rainbox we’re producing, working on, or advising a lot of those works (watch here a selection of some stuff made with the help of our tools).

With all this work, we’ve began to improve and develop new tools and techniques to be able to achieve some challenging animations, we’ve got a lot of user feedback with Duik, and we’ve listed and imagined what would be our ideal tools when we animate, in what would eventually become this new version of Duik.

During those two years, we’ve also founded Rainbox, the film production cooperative which also runs the development of the tools originally created by Duduf, which makes it possible to develop more advanced tools, as long as to test and use them in our own productions. 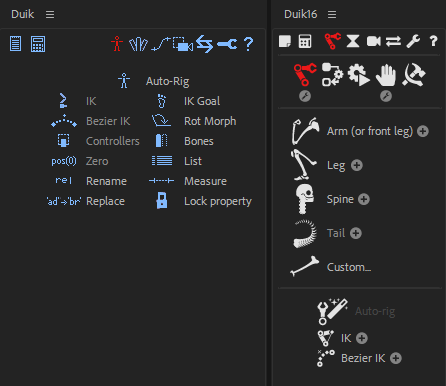 The goal of a tool like Duik is to make the life of animators (and riggers) easier. Therefore, the first and most important step in the design process of Duik 16 was creating a the best possible user experience with a great user interface. The priority was to make Duik as easy to learn as possible, while keeping it very quick to use. The other important goal was to make the interface as small as possible, so it won’t take much place in the After Effects interface ; we think it’s very important to be able to focus on the timeline and the viewport of the application, without any other tools interfering when you’re animating.

To achieve this, we’ve made Duik smarter. Almost all tools can be used in a single click, without any configuration step before, letting Duik make the best choice depending on what you’re doing, what are the selected layers, etc.
But of course we did not want Duik to restreint the user’s choices, so we had to find a way to easily see if there are any options, and to adjust the settings of the tools.
These thoughts are the core of the new user experience of Duik. In the user interface, all the tools are listed and categorized under tabs depending on what you’re doing (rigging, animating, …), and options for each tools can be accessed via a little “+” button next to the tool. You don’t know what to do? Just click on the tool button. You’re an advanced user? Click on the “+” button. That’s as simple as that.

Most of the tools can be used in a single click, but a “+” button allows the user to adjust the settings of the tools.

When talking with Duik users, we’ve noticed there are two kinds of them: advanced users who know well how to use Duik, and people who use it more sporadically who know it less, and don’t mind if the interface is a bit bigger.
In the previous version, Duik 15, we’ve tried to implement an “expert mode” for advanced users, but it was not very useful as it was just the same interface without labels and only icons.
In Duik 16, the expert mode is really different from the standard mode. It’s a smaller interface, yet still easy to use. 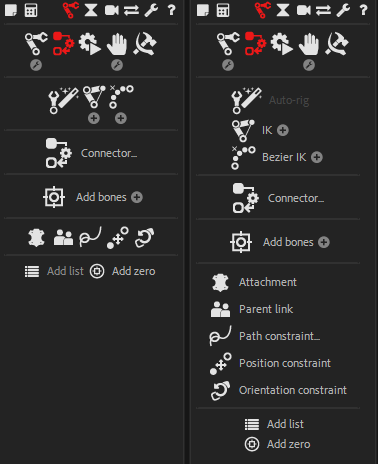 For this expert mode to be useful, we needed to design nice icons, which could be remembered easily, and which are all different enough while using the same concepts. Duduf talked about this in this article.

To make the rigging process easier and more versatile in After Effects, we’ve introduced the Structures which are very similar to bones or joints in 3D softwares.

Structures are layers you can add in your composition which will drive the animations, like the rig of a real puppet. The process is very simple: create or import your design in After Effects, add Structures and move them to the right spots (the pivots of each limb). Then you can rig those Structures, instead of the design itself like in previous versions of Duik, and finally link the design layers to the corresponding Structure layers.

This way, the rig you create is independant from the design. This means it’s easier to adjust the design even after the rig has been made, or even to re-use the same rig with other designs. Also, this rigging process is easier to fix or change if ever you need to adjust it even when you’re already in the process of animation.

An animation with the Structures visible.

As Structures will become so important in the rigging process, we’ve thought about the smartest and quickest way to create them, so we added the ability to automatically create predefined Structures for standard limbs, wether they’re for humans or animals. 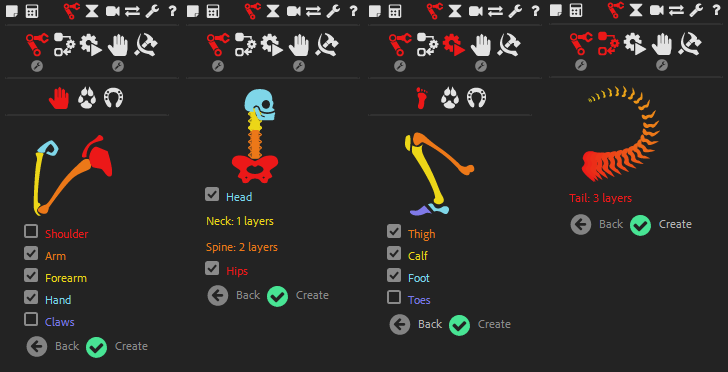 This enables you to use a very easy auto-rigging tool (still in development). As Duik knows what layer does what, it’s able to rig it precisely, fully automatically!

Using the autorig, and a set of constraints (see below), what you end with are controllers to drive the animation. You animate the controllers, they drive the structures through the constraints, and voilà! Your character moves. 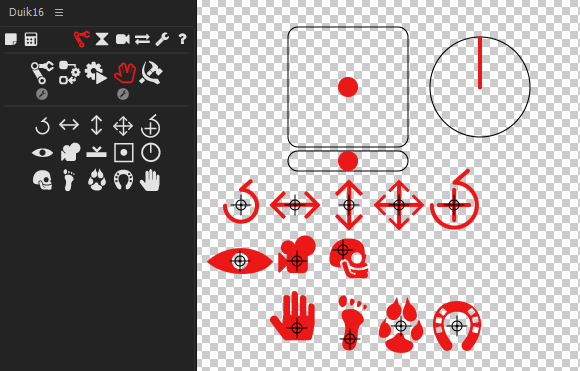 As the controllers are going to be the interface between the animator and the character, they have to be intuitive and easy to manipulate. That’s why we’ve not only introduced new shapes to make them easier to recognize, but we’re also implementing visual feeadback on the controllers to see what the controllers are doing! And of course, they can be easily personnalized, the user being able to change their colors and shapes as they wish. 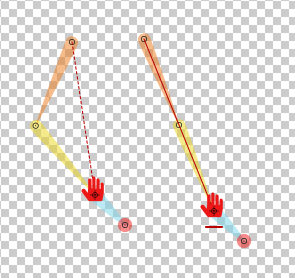 An arm Structure rigged with an IK. Notice how the controller uses a dashed or solid line (CC2018+ only) to show when the arm is outstretched. 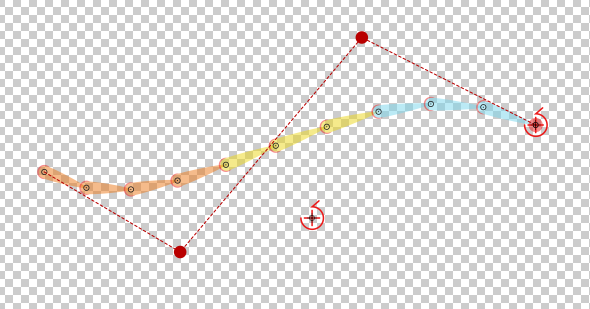 A tail structure rigged with a bezier IK.
The controller shows the IK with a dashed line (CC2018+ only) and two dots are used to display the tangents.

The interaction between the controllers and the Structures, and between the Structures themselves, happens through some constraints. Some of them are the core tools of Duik since the first version, like IK which drive the bending of limbs, and the Bones which are used to control any spatial properties: puppet pins, the emitter of a particle effect, and, in now in Duik 16 with CC2018 and newer versions of After Effects, any bezier value, like shapes or masks.

We’ve also introduced a whole new set of constraints to automate even more movements and make the animator’s life very easier: it’s now possible to animate parenting with the new Parent Link constraint, or to constrain a layer to a bezier path, to attach a layer to other layers using weights, etc.

The Connector is a very powerful new tool to allow you to link almost any After Effects property to any other properties, a bit like parenting for layers. It’s very easy to use, even if it’s possibilities are huge! You can even control an animation with a color property!

You can even control animation with colors!

The first versions of Duik only included rigging tools, but Duik is now a very complete animation tool set as well as a rigging tool set.

The animation panel includes all you need when you’re animating. There are a lot of tools in this one, we’ve made sure you have everything quickly available, right under your cursor, so you can stay focused on your work and not searching for tools. Here you can adjust interpolations (easing and velocity), select keyframes, copy and paste them accross multiple layers and multiple compositions, quickly fix spatial interpolations, and use some other advanced tools, like the motion trails to display the trajectories of your layers (CC2018 and newer only), or the X-Sheet to adjust the animation exposure when working with (fake) cel animation. 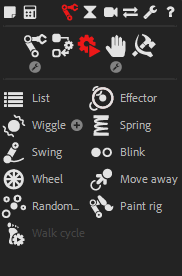 Use a spatial effector to control animations.

The controls of the procedural walk cycle tool.

Here’s a quick example of a very basic use of the procedural walk cycle tool. It can even be tweaked for more advanced animation!

Many thanks for your interest!

We wholeheartedly thank all the backers who helped during the crowdfunding campaign, and all the supporters of Duduf on patreon, without whom Duik 16 just could not exist.

Please consider helping us too, we need you to keep Duik free, and to show to the rest of the world that we can do stuff in a non-commercial way. This is a lot of work which could not be done without the users’ moral and financial help.

Either:
• Make a donation today to Rainbox and help the cooperative run the development of free tools.
• Or help Duduf’s work with a more regular support on Patreon. By becoming a supporter, you’ll be able to access the testing versions of Duik before everyone else! Duik 16 is already available there!

The comprehensive list of improvements and new features of Duik 16 is available here. This list is updated regularly as the development goes on!

This site uses Akismet to reduce spam. Learn how your comment data is processed.