A new version of Duik is available, including the first of the long awaited import/export tools.

We’ve updated the User Interface, for a better compatibility and appearance, both with older versions of After Effects (especially CS4) and on the latest version, CC2017.2. 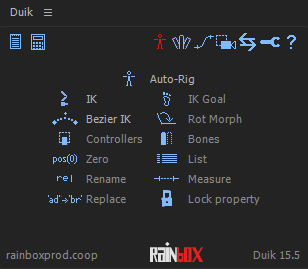 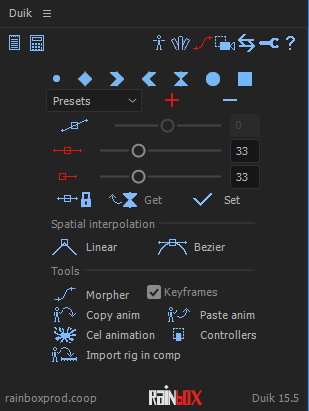 The first tools dedicated to exchange with other softwares have been developed! 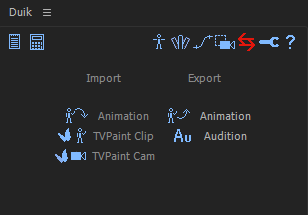 • The export animation tool allows to save animations in an open format, JSON or XML.
The exported file can then be reimported in After Effects, in another project, on another character… Those files will be used by Duik in the future for the development of an animation library, and will be able to contains complete character rigs too.
These JSON and XML formats can also be easily interpreted by other softwares, such as game engines, with just a bit of development. 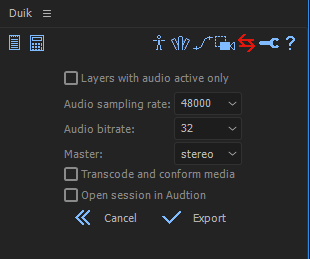 A very simple tool which will create an Audition Multitrack session from an After Effects Composition. All the audio layers will be imported in the session. Check the “Transcode and conform media” box if there are videos with audio in the composition, so that the audio will be automatically extracted and imported in Audition.

Several tools have been improved, thanks to users feedback. 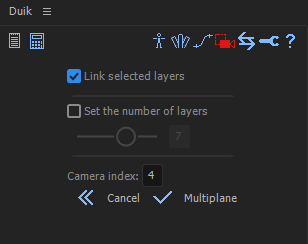 • Option to Lock & Shy the layers when creating IK

• Scale Z-Link now works as a toggle: click again on the tool to remove the effect from the layers once they are correctly placed.

Our tool to translate Duik is finally available, to make your own translations, in any language! More infos here.

At last, as always, several bugs have been fixed. See the changelog for a comprehensive list.